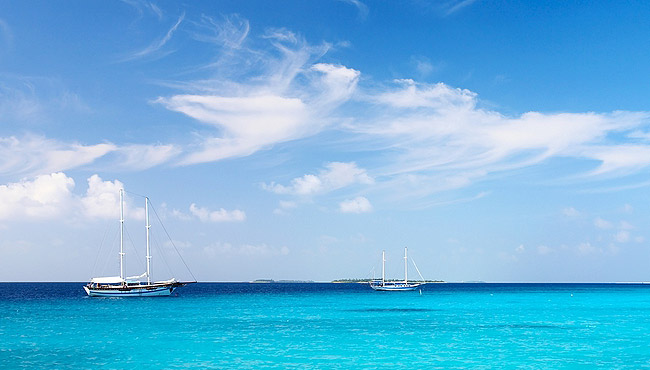 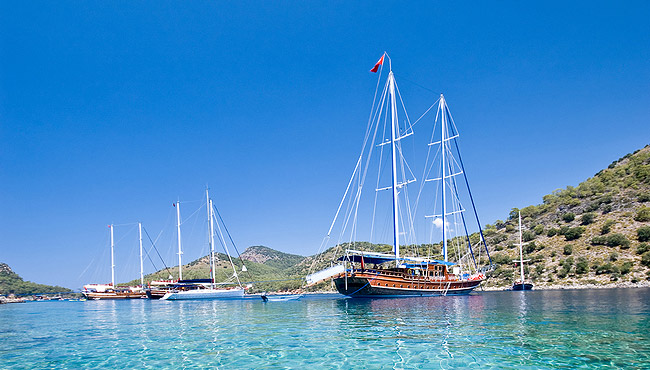 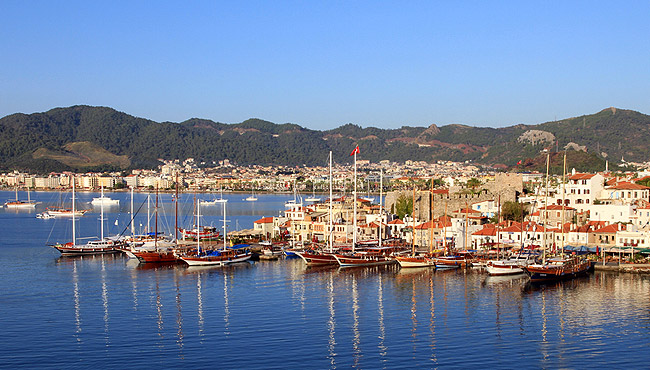 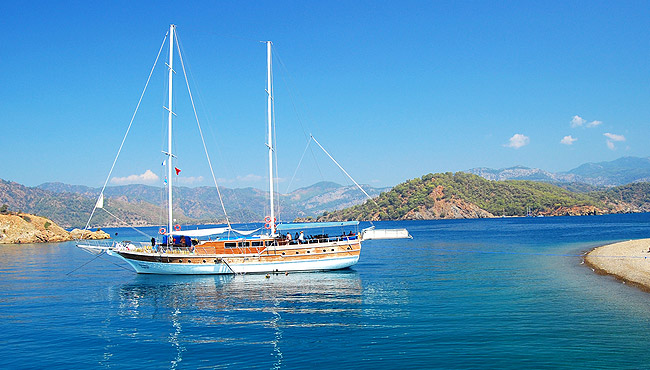 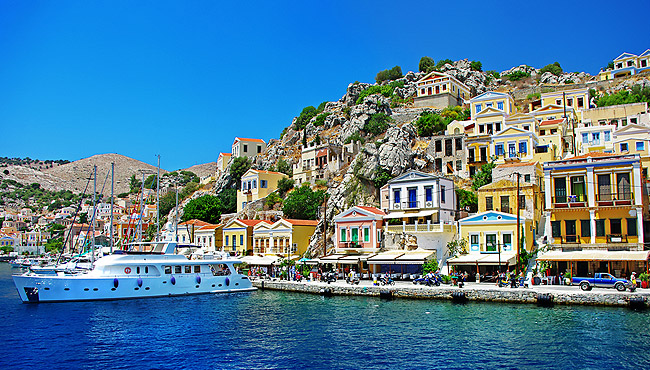 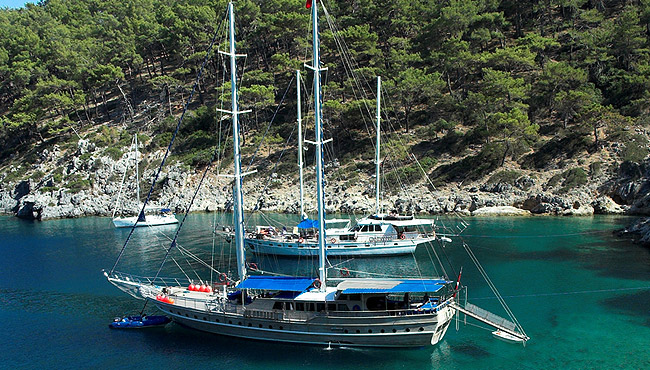 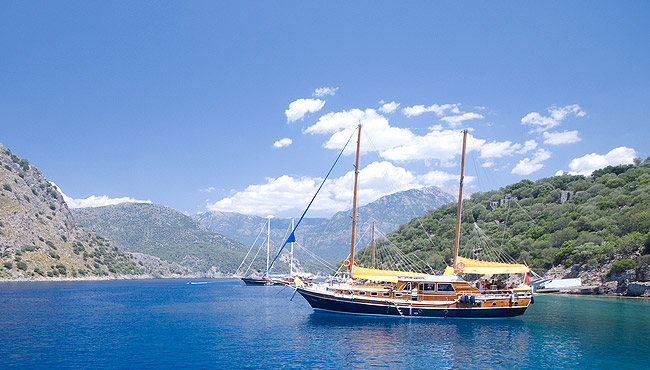 Along the Turkish coastline that tends to have more trees than the rest of the Mediterranean, you’ll sail within turquoise waters and sheltered bays that were once touched by the Byzantines, Carians, Romans, Lycians and Greeks.

Turkey is a wealth of intrigue, culture, geography, history and religion.

By far the most dramatic way to explore this stretch of coastline is by sailing through the pristine turquoise water aboard a traditional Turkish Gulet. The largest yacht charter bases are in Bodrum, Marmaris and Fethiye. Fethiye is known as both the Turkish Riviera and the Turquoise Coast. Modern Fethiye is built on the ruins of the ancient city of Telmessos. Marmaris is one of Turkey’s premier vacation resorts, built around a sweeping natural bay at the foot of a steep mountain slope. The old town is a maze of twisting little streets with whitewashed houses amid an excellent shopping bazaar. Marmaris is bustling with activity, shops, markets and nightlife. Bodrum has many pleasant bars, alluring restaurants and some of the best open-air nightclubs in the Eastern Mediterranean.

The cuisine in Turkey can be described as a mixture of Asia and Europe. In addition to the traditional raki and shish kebabs, there is a huge selection of fresh vegetables and very good local wine available.

Whether you visit ancient ruins; soak in the Turkish baths or enjoy the culinary delights of the local cuisine, even those with the highest expectations will not be disappointed. Turkey with more coastline than any other country in the Mediterranean has become one of the most important yachting destinations and is one of the most sought after luxury yacht charter holiday areas in the Eastern Mediterranean.

Turkey’s location at the crossroads of Europe and Asia makes it a country of significant geostrategic importance with a mixture of cultures and civilisations. Many empires ranging from the Sumerians, Hittites, Lydians, Byzantines, Seljuks to the Ottomans have reigned the area in and surrounding Turkey. Turkey was declared a Republic in 1923 after the fall of the Ottoman Empire and consists of 70% Turks, 18% Kurds and 12% others.
Official language : Turkish
Capital : Ankara
Largest City : Istanbul
Area : 783,562 km2
Population : 77,000,000
Currency : Turkish Lira (TL)

Turkey Yacht Charter “Must Do”

Party all night with the international jet set in the world’s largest outdoor club at the waterfront Halikarnas in Bodrum. History lovers will enjoy the ancient Greco-Roman town of Ephesus, one of the Roman Empire’s greatest cities and one of the Seven Wonders of the World. Visit mosaic-filled Ottoman mosques in Istanbul to view Turkey’s most impressive architecture. Experience the sight and sounds of the Grand Bazaar.

Please note that Turkey is not part of the European Union and therefore please check the visa requirements: https://www.evisa.gov.tr/en/

Use Dalaman International Airport for Marmaris and Fethiye, and Milas-Bodrum Airport for  Bodrum. Please note there are two airports in Istanbul and both are used for international and local flights. Please ensure you book your connecting flight at the same airport else it is a 1.5 – 2.5 hour journey to reach the other airport. Flight time from UK: 4-5 hours. The most popular yacht charter ports are: Bodrum, Marmaris, Fethiye and Göcek.

Best time for a Turkey Yacht Charter: May or September when the days are pleasantly warm and the nights are mild. On the popular yacht charter area on the south coast between Bodrum and Fethiye, expect a Mediterranean climate with hot summers and mild winters with temperatures in the region of 30°C in July and August. Summers are hot and humid in Istanbul but it can get very cold with snow in winter. 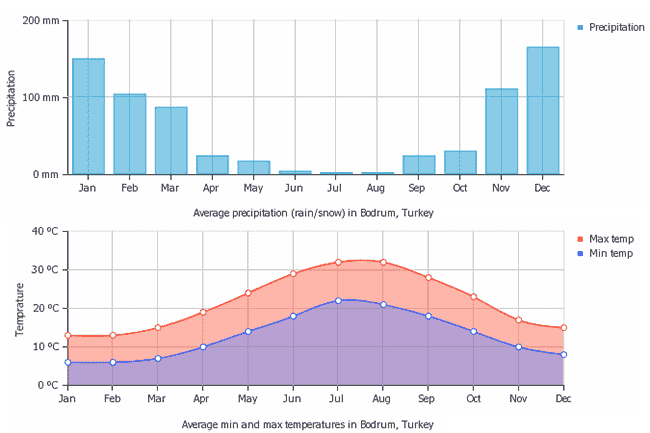