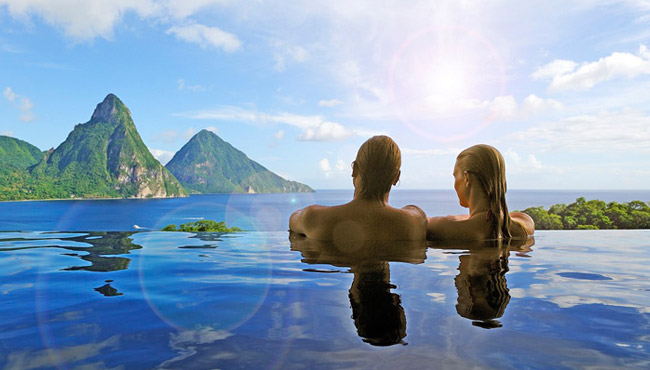 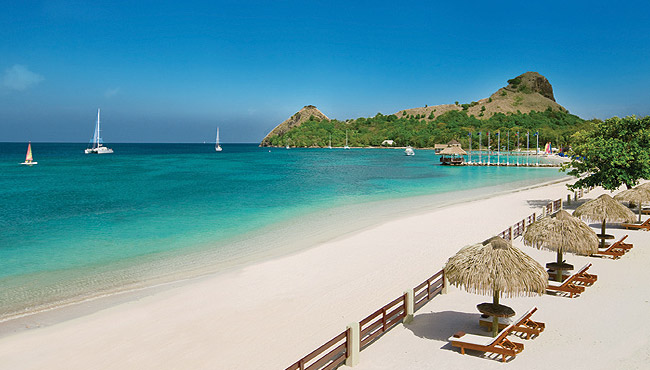 St Lucia (Saint Lucia) was named after Saint Lucy of Syracuse by the French, the island’s first European settlers. Britain took control of St Lucia from 1663 to 1667 and in the following years, was at war with France 14 times and rule of the island changed frequently as the French and British ruled seven times each. In 1814, the British took final control of the island. In 1979 Saint Lucia became an independent state of the Commonwealth of Nations associated with the United Kingdom.
Capital and largest city : Castries
Official language : English
Area : 617 km2
Population : 173,000
Currency : East Caribbean dollar (XCD)

A must-see are the Pitons sticking out of the sea at Soufrière which is a UNESCO World Heritage site. The best-known features are of course the Sulphur Springs, Gros Piton and Petit Piton. There are beautiful coral reefs, pilot whales, hawksbill turtles and many species of fish and rare birds, some not found anywhere else in the world. The Soufrière Volcano is known around the world, but locally it is known as the Saint Lucia sulphur springs. Visitors are able to drive right into the volcano to view the hot rocks, steam and boiling pools of murky water. Diamond Waterfall, Botanical Gardens and Mineral Baths can be found in Soufrière. In 1784, the Baron de Laborie sent water samples to Paris to be analysed by the “Medecine du Roi”. Results showed the waters held the same properties as the famous French spa at Aix-les-Bains and the Aix-la-Chapelle in Germany. Bathing in the waters was highly recommended for people who suffered from respiratory complaints, ulcers or chronic rheumatism. St Lucia’s interior is green and mountainous with plenty of hiking trails but it is advisable to use a guide as there are four species of poisonous snakes on the island. Castries Market is named as one of the top ten markets in the world by National Geographic Magazine. Castries Market is the oldest market still in operation today where locals sell spices, fruit and vegetables, seafood and local crafts. The Treetop Adventure Park in Dennery offers the hugely popular zip lines and a range of jungle walks. Visit Fond Doux plantation where they grow cocoa, one of the island’s main crops beside bananas. The guides will introduce you to the fascinating world of the cocoa bean, the pods in the trees, beans drying in the sun and the fermenting sheds.

Foreign nationals intending to visit Saint Lucia pleasure are required to have a valid passport with at least six months validity and a valid Saint Lucian visa. 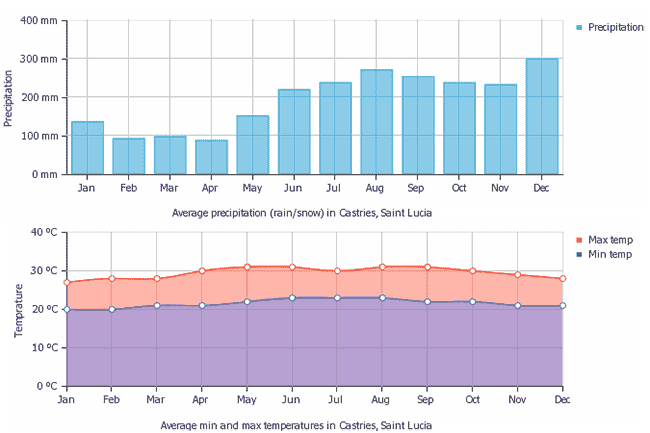