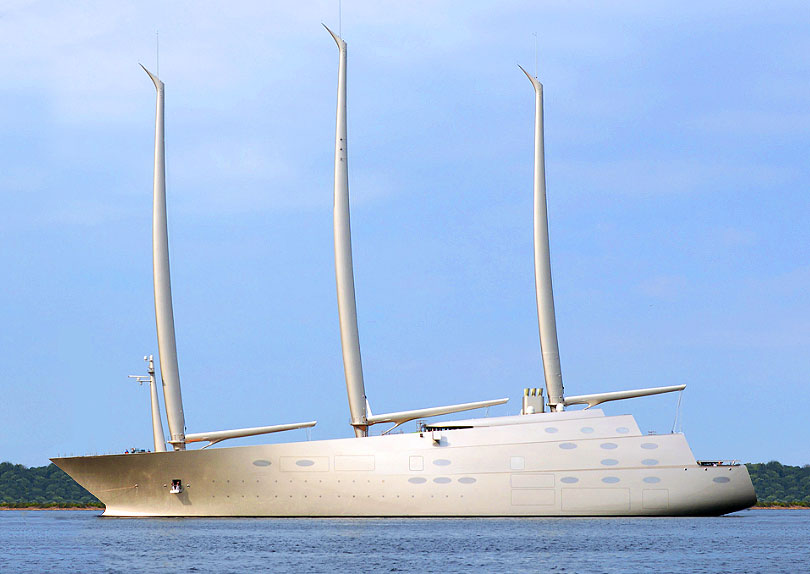 At 142m in length, with ship masts 100m high, ‘Sailing Yacht A’ is the world’s biggest sailing yacht, with 8 decks and a 0.3m thick glass underwater observation room located in the keel. The sailing ship is owned by Russian billionaire Andrey Igorevich Melnichenko, who is believed to have paid £260m for the vessel. The vessel is an upgrade to the billionaire’s current ‘Motor Yacht A,’ that costs £190 million.

Sailing Yacht A offers accommodation for 20 guests with 54 crew to ensure a luxury yacht experience.

Built by German Naval Yards, Nobiskrug in Germany, the design work, rig and keel were done by Dutch-based Dykstra Naval Architects, with the masts constructed by British firm Magma Structures in Portsmouth and the sails by Doyle Sails in the United States. The yacht was designed by Frenchman Philippe Starck who also designed the current Motor Yacht A with the similar “aggressive look” as well as Steve Job’s yacht ‘Venus’.

The three carbon fibre masts are the largest and strongest composite freestanding structures in the world. The centre main mast is 100m tall and contains a small room. The steel hull is 142m long and incorporates carbon fibre to keep the weight down. She is powered by two MTU 3,600kw diesel engines and two 4,300 kw electric motors. The technology is hybrid diesel-electric propulsion with controllable pitch propellers. Security features include bomb-proof glass and 40 cctv cameras.

Sailing Yacht A boasts a staggering eight decks and its keel incorporates one of the largest single pieces of curved glass ever made at 18 m2 (193 sq.ft) and weighs 1.8 tons so guests can view the ocean below from the underwater observation room.

Her total sail area is more than 3,700m2 (40.000 sq.ft).  The three masts spread sails each of which can be furled and unfurled by a computer controlled system. This enables Yacht A to sail very efficiently in all wind directions and conditions. All of the sails are housed within the masts and system is extremely flexible and any combination of sails can be set by computer and be furled by computer as the wind strength increases.

Ranked just outside the world’s top 100 richest men by Forbes magazine with an estimated fortune of $9.2 billion, the 43-year-old Melnichenko is a Russian industrialist with businesses in the fields of coal and fertilizers and has used a reported $450 million to fund the building of “Sailing Yacht A.”